Everyone gradually arrived at Seneca Rocks, then milled around for a bit waiting for our trip leader to arrive. Since Rocky Parsons and Aaron Bird both had a good idea where the cave was, and since the leader was quite late, our caravan set out over the twisty mountain roads to locate the cave. We made it to the parking area no problem, though the cliff up on the mountain looked like it was miles away! The hike turned out to be enjoyable one - there was a well-kept trail the entire way up with a spectacular view of the valley. 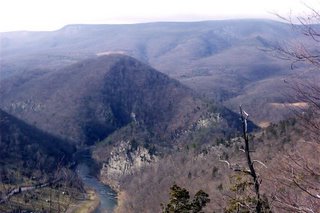 The beautiful view from our hike up the mountain

The cave was literally at the top of the mountain! We suited up and headed through the entrance gate (Cave Mountain Cave is closed during the summer as a bat nursery). Because of the steep strike of the limestone, most of the passage and rooms had diagonal walls, giving the cave a bit of an amusement park funhouse feel. You can tell that at one time, the cave had a good bit of nice formations, but it's had a lot of traffic over the last 150 years (it was once mined for saltpeter), and it now looks very worn. It's also a very dry cave - I was able to wear my cave suit the next day without washing it!

Most of the passage is large walking passage and nice-sized rooms. We climbed down to a lower level, and Aaron rigged up a field harness, belay line, and hand line on the spot to help people down a climb. In the lower and upper levels, many bands of limestone were completely covered in fossils of shells and large crinoids; I kept Aaron and Rocky busy with geology questions the entire trip. 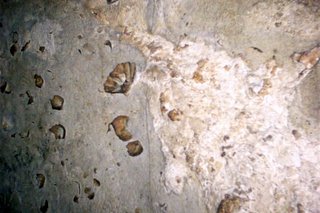 We finally headed back to the upper level in search of an alleged "crystal wall" which we had some scribbled directions to. The group probably looked like a bunch of lost tourists, but we found it after more debate than should have been necessary... and it turns out that the crystal wall was actually pretty impressive. It was probably an 8' high layer of dogtooth spar, in one spot completely covering the sides and top of an archway you could walk under. 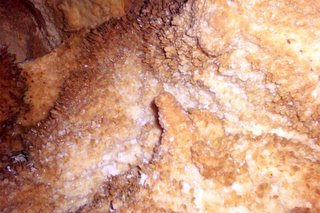 We left the cave, hiked back down the mountain, and were all on our respective ways home before dark.

Photos: Mine, Doug McCarty
Posted by Dave Riggs at 9:46 PM

Thanks for the post and photos! Now I'm excited to explore this cave. Do you know the best time to go? And does the cave ever close?

Cave Mountain Cave is normally closed (with a locked steel gate) throughout the summer (Apr 1 - Sept 15) because it houses summer maternity colonies of endangered Virginia Big-Eared Bats. However, the cave was tested positive for White-Nose Syndrome, and I believe that it is currently closed year-round by the US Forest Service.

Oh wow... Thanks for this information. Is there a website with updates as to when it will be open again?

The VAR Closed Cave List is the best place to check for cave status, though it is sometimes not updated as often as it should be.